PSORCLEAR is an inexpensive, consistent, and effective treatment of psoriasis and eczema. It was created from the information that is in a booklet that was written by the founder of PSORCLEAR, several years ago. That booklet chronicled the experience with the formula. At that time, the author had endured the pain, suffering and heartache of Psoriasis for over twenty years. At one point, being covered over 85%. Becoming a test subject for new, at the time, treatments had become a common endeavor. That helped offset the incredible cost of treatment.

After years of trying virtually every treatment available at that time, and based on the recommendation of a genetic researcher who worked for a major university medical center, the alternative, natural treatment was created. It has now become PSORCLEAR. Its results were amazing and, after several months, for all intents and purposes, the Psoriasis was in virtually total remission. The plaque, fingernail, and toenail, scalp, guttate, and other types were virtually unseen with no outward signs at all.

The author had not owned a short-sleeve shirt, a t-shirt, shorts, or a swimsuit for over 20 years. Now had a complete supply, having literally been there, done that and finally ended up with a whole closet full of t-shirts, as the saying goes. To this day, on every trip, a t-shirt is purchased as a souvenir. Once covered so completely with Psoriasis, it was always necessary to wear long-sleeve shirts and long pants. He also had to wear light-colored shirts, to help hide the dandruff appearing from the scalp Psoriasis, which was always on both shoulders.

Life finally became completely normal, which is the desire and goal of virtually every Psoriasis and Eczema sufferer. The Psoriasis, after over 50 years of suffering, it is still there but, is now only known to exist personally. Absolutely no outward signs of it appear, going on 30 years now. PSORCLEAR is an inexpensive, consistent, and effective treatment of psoriasis and eczema.

With all the new advertising that has come out for the “new” and incredibly expensive prescription psoriasis and eczema treatments, it became evident that treatment with this product and its results should not be kept secret any longer. It should be shared with all those who suffer from this devastating affliction. PSORCLEAR was created as an inexpensive, consistent, and effective treatment of psoriasis and eczema. After years of suffering from Psoriasis, a relatively safe and incredibly effective product was finally found.

With many of the other products and treatments, after a period of time, you may build up a resistance to the medication or, it will become ineffective and you may find the need to change to another. This will most likely also occur with the new treatment that you switch to and you’ll find the need to change yet again. This becomes a never-ending cycle. This is NOT the case with PSORCLEAR. It will continue to be effective for as long as you continue to use it. It has also been found to be a product that effectively treats other chronic skin disorders, such as Eczema and Rosacea.

PSORCLEAR is a Zinc/Copper Compound in capsule form and has been repeatedly demonstrated to have a very substantial, relieving effect on most skin abnormalities, including Psoriasis, Eczema and also Rosacea. Each capsule consists of a compound of Zinc Gluconate and Copper Amino Acid Chelate as the active ingredients. It is specifically formulated with zinc to relieve and, in most cases, virtually eliminate the visual effects of Psoriasis and other disorders. AND it also contains copper, for the purpose of aiding in absorption and to help counteract the possible effect of copper loss in the body. Copper assists in the retention of iron, which has been written about. But, it does not have any test studies to back up the assertion.

PSORCLEAR was formulated in capsule form, with minimal filler, to help combat the possible side effects of digestive upset and possible diarrhea and so that its contents may be mixed with either food or beverage, in order to make it easier to take for those who have difficulty taking solid pills. It is recommended that PSORCLEAR be taken with meals, whenever possible, and daily dosages can be split (i.e. morning and evening).

PSORCLEAR is Laboratory Tested and contains NO yeast, NO wheat, NO gluten, NO soy protein, NO milk or dairy products, NO corn, NO sodium, NO sugar, NO starch, NO artificial coloring, NO preservatives, NO flavoring, NO lactose, NO nut or nut by-products, NO caffeine.

It is also thought that there may be a depletion of copper in the system, due to taking larger doses of zinc. It is for that purpose that copper is added to the formulation. Copper also helps with the absorption of both iron and zinc and is a very essential nutrient for blood cells. The side effects of taking zinc in pill form are, for the most part, not from the zinc itself. They are usually from the amount and type of the fillers used to produce zinc in tablet form. Some of these fillers may even cause allergic reactions.

PSORCLEAR is formulated with only vegetable cellulose, instead of the other various fillers that are used for other tablets. There is one welcome side effect from taking zinc. Your ability to catch colds is virtually eliminated.

These possible side effects are minuscule compared to the benefits of zinc as a treatment for Psoriasis.

The formulation of PSORCLEAR uses a chelated zinc ion compound that is well known to be very important for development and health of body tissues and a chelated copper ion compound to aid absorption and to aid in any potential loss of copper in the body. It is also very important to note that zinc is one mineral that the body does not store. It needs constant replenishment. This combined compound is completely water-soluble. That means that the body will only use what is needed to maintain adequate mineral levels. Then it will discharge any which is not used. This makes the possibility of what might be considered an overdose due to large consumption to be extremely unlikely.

The amount of PSORCLEAR to be taken is one capsule for every 50 pounds (23 kg.) of body weight. That dose has been found to have a substantial effect on the reduction by those who have taken it and in most cases the elimination of the visual effects of both Psoriasis and Eczema. Lesser dosages are required to treat Eczema and Rosacea. The dosage may vary from person to person.

There are several published clinical studies that been undertaken regarding the effect of zinc on Psoriasis, Eczema and other chronic skin disorders. It has long been commonly known that zinc is a major element necessary for normal skin. That is the exact opposite of the abnormal skin caused by both Psoriasis and Eczema. There are many differing opinions of what is a dosage of zinc that is too much and possibly toxic. None of those have been substantiated by any clinical testing. The opinions range from 225 to 300mg of zinc per day. Taking 100mg, or more, of zinc, is commonplace.

Regression of the Disease

For most, the regression of both Psoriasis and Eczema occurs as follows:

(1) Within the first few weeks, the itching will subside,

(3) By about 90 days from the start of taking PSORCLEAR most, if not all, of the outward indications of Psoriasis and Eczema, as well as Rosacea will dissipate to the point that the sufferer will be the only one to know that it still exists.

It does take a bit longer for the warping and discoloration of fingernail and toenail Psoriasis to subside. It has been reported that virtually all forms of Psoriasis and Eczema, including Psoriatic Arthritis are substantially, if not fully diminished.

For those who have used the dosage reported to be most effective of one capsule per every 50 lbs of body weight daily and have taken it for 2-3 months, the success rate is about 90%. Should you take less or take it for only a short period of time, it is very likely that you will see minimal or possibly no effect. The success rates for the other prescription drugs that are available are from 30% to 70%. The level of clarity achieved from those 244+ drugs is, at best 80%.

But, that is not the case with Psorclear. Many see a total clearing. PSORCLEAR is an inexpensive, consistent, and effective treatment of psoriasis and eczema. 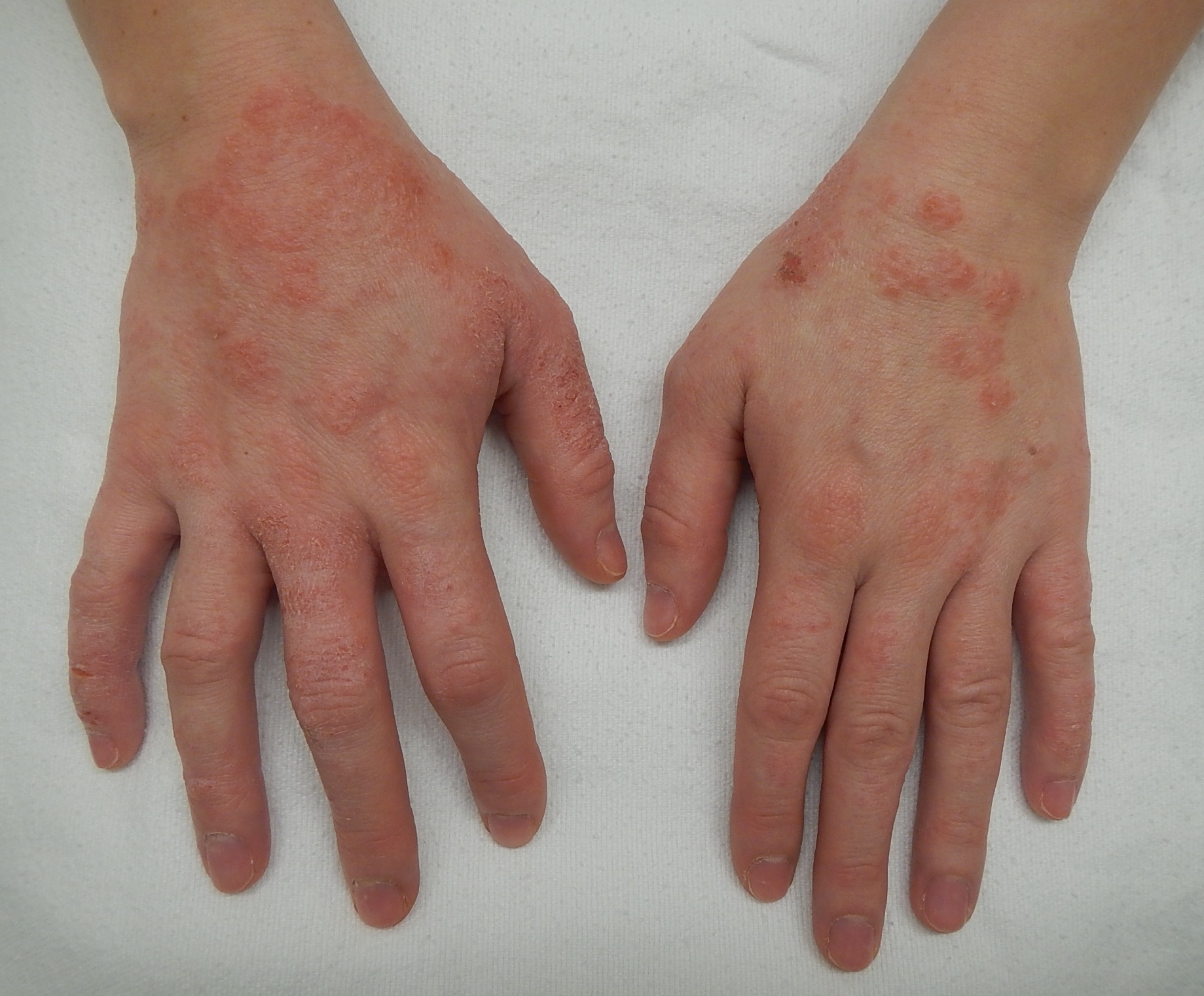